G.T. Bray is a park in Bradenton, Florida. There doesn’t seem to be much history to G.T. Bray. In doing some research, I couldn’t even find out who or what “G.T. Bray” was named after. But the G.T. Bray park has large fields for soccer, pools for swimming and long paths for running or riding bikes including an artificial mountainous trail for mountain biking (rare for flat-landed Tampa Bay). 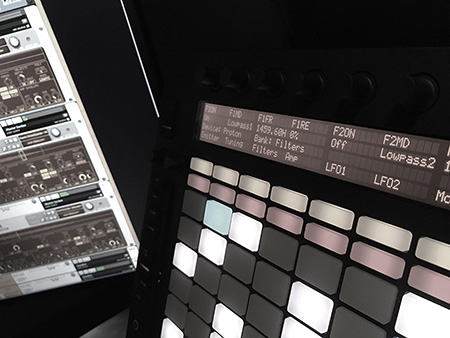 A large portion of the sounds were created by recording myself riding the same bike I had when I was a teenager; a green and chrome Specialized Hardrock GS.

I recorded the bike sounds in GT Bray because I used to ride there a lot growing up. I recorded myself riding one of G.T. Bray’s asphalt trails. Another recording was of me sliding to a stop in loose gravel. And a third was of the bike upside down being pedaled by hand.

The last noteworthy thing about the song is there are little clicks, bloops and other sounds in the song. Those come from the most unexpected source; the bass. The bass is a single, simple “four on the floor” hit on my Kong virtual drum machine. The bass has a parallel channel on it with “The Echo” virtual analog tape delay to delay the bass on a separate channel. I’m using the mighty Synchronous via a bus channel of both bass channels. The Synchronous then is using a combination of distortion, filtering and delays to create the odd little sounds you hear. Groovy.

I think, of all Bradenton Ambient songs, GT Bray was the funnest to create.