The song is based on the location in Bradenton known as Oneco. Oneco has a large strip of small industrial businesses. It’s part of the Pathway to Sarasota. 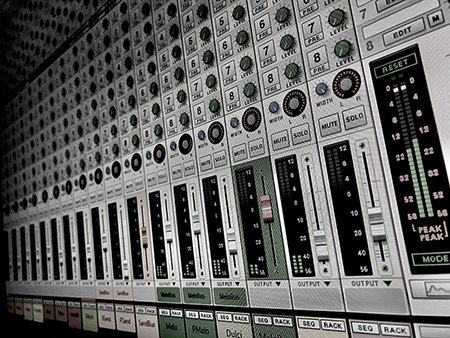 The vibe of the song comes from the fact one of the reasons I’m in Oneco (as opposed to just passing through it) is when I’m getting one of my cars worked on. That’s where the steel sound comes from in the song. I did a field recording of a mechanic as he hammered metal on an engine. I used that sound in combination with a xylophone-sounding synth to create a nice, industrial tone for the song.

I also added a heartbeat... my own. This one was recorded not from my iPhone but from my AKG studio mic. I’m using my heartbeat as rhythmic timing for the song, as well as create a sense of anxiety and fear. I did this because Oneco is sketchy. The people there are friendly, but there are some homeless, drunks and drug addicts that walk the streets and people in the surrounding businesses are just kinda’... gruff, you know? Like probably 90% of people who work in the industrial parts of Oneco have seen jail time at one point or another (including the business owners). So since the album is intended to invoke nighttime ambient music listening, Oneco at night has that tension.

But the other reason why I added my heartbeat is because a lot of anxiety and fear is experienced when I’m getting one of my cars worked on. When it’s something I can’t work on myself, it’s typically a serious situation. Worrying if something can be fixed today, how expensive it’ll be or if it can even be fixed. Thus the heart beat capturing the mood.

One of the other sounds is a field recording I did at one of my mechanics walking in their shell drive ways. With all the cars and foot traffic, the shells end up granulized into powder-like sand particles. This white-looking sand is just everywhere... even on concrete walkways, you always hear it scraping against your shoes as you walk. Other customers wait in dirty office chairs inside the shop, but I’m out there involved, lending a hand or just pacing back and forth. Thus the sound of my feet walking, lending a slightly uneasy tone to the song.

A problem with the song was that it had a much more dark feel to it compared to the other Bradenton Ambient songs. Even though it was the second song to be started, it was the last song to be finished. I finished the song by adding more softness to smooth out the hardness. I ended up adding some rhodes that sound like a xylophone to help create some beauty for the song.

One of the last things I added was a Spanish guitar. That seems like something that wouldn’t fit well with a song like this and it’s true; it wasn’t easy getting a Spanish guitar like this to work. But I was able to add exactly what I felt the song needed; something classy, pretty and a heavy dose of latin influence. I added the Spanish guitar because northern parts of Bayshore Gardens, leading into Oneco, is where many Latino residence of Bradenton live. A lot of the businesses I use in Oneco are run by Latino business owners. By adding the Spanish guitar, it makes the song really feel like the area of Oneco.

Of all the songs in Bradenton Ambient, Oneco was the hardest by far.