Palma Sola is an area in Bradenton that includes the Causeway. But the song isn’t about the area of Palma Sola generally but is specifically about the road Palma Sola Boulevard.

Palma Sola Boulevard is a two-lane road built for rich people’s houses facing Palma Sola Bay (which the Causeway intersects). This road has lots of curves and is one of my favorite spots to drive fast around curves at 3 in the morning (constantly accelerating and braking for the massive speed tables).

I wanted this song to give that feeling of driving on this road. It’s not always about driving fast, sometimes (especially in the day time) it’s just about cruising on the road. It’s so quiet and peaceful, most times the only sound you’ll hear other than your own car is the sound of cars driving by in the opposite direction.

That’s why the only field recording in this song is a recording I did of a car driving by on Palma Sola Boulevard. I thought about panning the audio only to the left side, the side you’d hear the car passing by when driving... but I decided to give the listener a sense of being on the side of the road and hearing the car pass from one side to the other. I think it creates a better audio space for the listener. 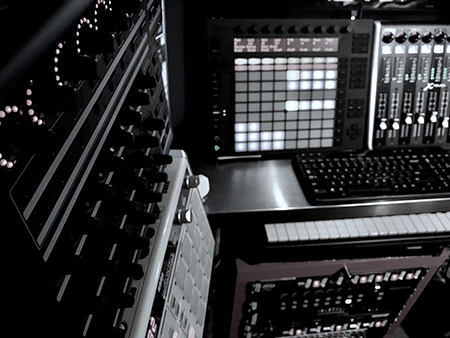 One of the interesting things about Palma Sola is that it’s the song with the fewest mixer channels of Bradenton Ambient or any other songs I’ve created. For instance, Oneco has 17 or more channels, while Palma Sola only has 7 channels.

I think the song has a lot going for it, even if it’s not quite as edgy. This is a song that just makes me... so nicely sleepy. Others who have listened to it have said the same thing, they can be wide awake but Palma Sola makes them want to go to sleep... not out of boredom but out of a kinda’ hypnotic way.

Palma Sola is a special song, maybe not in the same ways as the other Bradenton Ambient songs but in its own unique way.